Group reflection within a team

Group reflection within a team - Munira

Munira is a physiotherapist working in private practice. She has treated her service user Russel for the last three months after he was involved in a fall at home.

Munira discharged Russel at their most recent appointment as she was satisfied with his progress and believed that he would be able to maintain his mobility by practising the exercises she had showed him. Munira believed that this process had gone smoothly, and that Russel knew he could contact her if he needed further assistance.

Later in the week, Munira’s practice manager Michelle tells her that she has received a long complaint email from Russel regarding the end of his treatment. The manager tells Munira that Russel is clearly very upset and feels like his treatment ended abruptly and that no regard was given to the pain he still feels in his lower back and the trouble this causes with his sleep. Russel says that when the session ended and it was clear he wasn’t going to see Munira again he was too taken aback to raise his concerns or to ask follow up questions. Russel’s email ends by saying that he has been kicked out with nothing but a sheet of exercises and no support.

Munira is very surprised by this as she thought that the end of treatment had gone smoothly and she decides to prepare this topic to be discussed in the practice’s group reflection session.

How did Munira use reflection?

Munira starts by writing the event up herself, providing detail of the initial interaction, the subsequent email and how both events made her feel. She looks back on the discussion with Russel and thinks about how she communicated and how Russel received this message. At a supervision meeting with Michele, Munira also asks for her input on the topic before taking it to the larger group. Michele suggests that Munira refers to guidance from their professional body to see if there is any best practice on discharge that can be included. Michelle also suggests that Munira think about any support she could have used from the rest of the team with this event.

The group reflection session involves the five other physiotherapists from the practice and is facilitated by a different member of the team each month.  Munira begins by discussing her interaction with Russel, the steps she took to explain treatment and her own thoughts. The facilitator thanks Munira and then asks the group to think about the following:

The group discussed their own experiences with miscommunication with service users and how this has impacted their practice. They felt that while Munira had been thorough in her discharge, the service user had not received enough information beforehand about the duration of his treatment and was taken by surprise by the end of the care.

Munira was encouraged to hear how other professionals had struggled with this issue in the past and to gather tips from their experiences.

How did it benefit her practice?

Munira has taken a few practical steps to avoid issues in the future including a more detailed explanation of her treatment plans at the initiation of treatment. Munira also makes sure to regularly check in with her service users, to establish if they understand and if they have any concerns. This explanation helps service users to understand the goals they share with the professional in their treatment and to know when they are close to meeting the goals required for discharge.

Munira has also re-written the discharge material she gives to service users and it now fully explain discharge as the end of a course of treatment and not the complete end of assistance or help. When making a decision to discharge, Munira uses the information she has about her service user including their homelife and support structures. When Munira looked at Russel’s case, she felt that she did not properly assess how the end of treatment may impact him. While Russel met all the physical goals to end treatment, he was clearly anxious about re-injuring himself as he lives alone.  If a service user has limited support for their needs at home, this is taken into account when deciding whether to discharge and service users can be given additional resources and linked about with community-based services.

These changes benefit Munira’s service users and have helped her to improve her practice. She has agreed to present to the group in a few months to give feedback on how this change has impacted her and her service users. 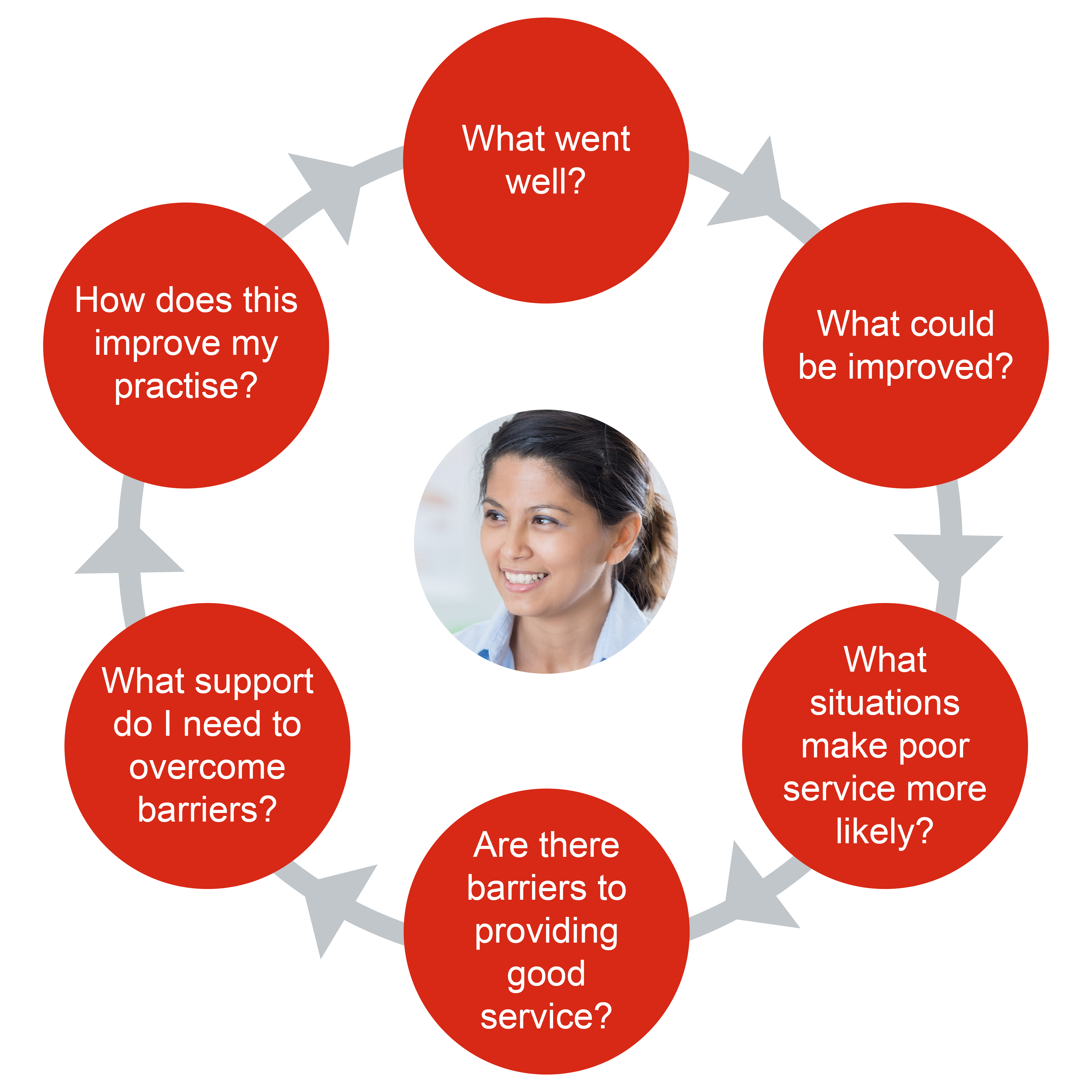 How did reflection benefit Munira and his team?

The reflection activity provided a space for the team to discuss an ongoing issue and to help craft the solution. Without providing time for reflection, the group may only have had a chance to focus on the problems, rather than considering the causes of those problems.

Using reflection has allowed all the members of the team to share their thoughts and allowed Munira to learn from the experiences of her team members. After a productive reflection activity, the whole team now knows that there can be a constructive space for them to raise concerns or to share their experiences with others, and that this can lead to positive outcomes.

What was the impact of reflection the practice of Munira and his team?

All of the benefits that were discussed above are likely to have a positive impact on the team and its practice. The team now have less paperwork to complete when reporting an aggressive patient incident – this will allow them to focus more of their time and energy on their service users.