This report follows those which looked at the 2017-18 and 2018-19 academic years. Previous reports, particularly the 2017-18 report which considered our first year of assessing degree apprenticeship programmes, emphasised the need to be flexible and take a case-based approach to our assessment methods.

In deciding how to review individual apprenticeships the Executive considered that the integrity and effectiveness of our processes could be maintained while avoiding unnecessary regulatory burden on our education provider partners, and disproportionate costs on the HCPC itself.

The normal approval process was used where an education provider had developed an apprenticeship programme from scratch, i.e. if they did not have an existing approved programme in the relevant profession. The normal process involved a six month lead-in as well as the standard post-visit process which normally takes around three months. In these situations the normal stipulations apply about approval needing to be in place before applicants can enrol in the programme. We would use the major change process if the proposed apprenticeship was closely modelled on an existing programme and had few significant differences from the approved programme, allowing for the different structural requirements of apprenticeships.

There was a noticeable reduction during the 2019-20 academic year in requests to approve apprenticeships through the major change process (18) and through the approvals process (8). For 2018-19 the equivalent figures were 32 and 29 respectively. The reason for this may be that apprenticeships are now an established part of the landscape and so some of the initial high take-up has declined. Many of the institutions which were going to launch apprenticeships have done so already.

Requests to approve new apprenticeships in the last two years, by process

The tables below summarise the data and outcomes associated with the submitted major changes for degree apprenticeship programmes in the last year.

Education provider withdrew during the process

Only one out of the 18 requests that came to us through the major change process was reviewed through the approval process after initial assessment by the Executive (5.5 per cent). This is a noticeable decline from the previous two years. It is comparable to the figure for all major changes in 2019-20 (3 per cent), but comparisons are difficult because of the low actual numbers.

As shown in the graph above, in 2017-18 one third of major changes requesting an apprenticeship were referred to the approval process. In 2018-19, 14 per cent were referred to the approval process. The downward trend is likely due to changed expectations in the Executive around the general principles for assessment, and what would constitute the most reasonable and proportionate approach. As discussed elsewhere in this report, the available data supports our decision to adopt these general principles.

As table shows, five cases were cancelled at various stages. This was due to education providers determining that they were not ready to proceed, or because of delays due to the COVID-19 pandemic. Three of the withdrawn cases were from one education provider, so this may be reflective of particular institutional circumstances.

In the nine cases where additional documents were requested, a total of 61 standards were cited, which is an average of almost seven per report. Strikingly, these were heavily concentrated in the two cases where the education provider withdrew from the process (10 standards and 14 standards respectively) or where the visitors recommended a visit (10 standards). More than half (34) of all the extra documentation requests were made in these three cases.

In the cases where additional documentation was requested, and a final recommendation of approval was made, the average number of standards in respect to which further evidence was requested was between four and five. 27 standards were cited across six reports, although more than half of these (14) appeared in one single report.

The average number of additional documentation requests in the previous year, 2018-19 was seven, or four if you remove one education provider whose programmes received a particular large number of requests. This suggests that the assessment of apprenticeships through major change is largely stable across time, and that there are not significant disparities in assessment across different visitors, Education Officers or institutions.

Twelve cases in total went through the full major change process. Of these seven (58 per cent) required additional documentation. This is broadly equivalent to the figure for 2018-19 (53 per cent) and rather higher than 2017-18 (40 per cent). There is a noticeable upward trend here – especially if we include all cases where additional documents were requested rather than just cases reaching the visitor recommendation stage (the figure for all cases is 64 per cent, i.e. nine out of 14 cases, see the table above). It should be viewed in the context of the steep decline in the number of apprenticeship requests made through major change being referred to the approval process at the initial stage (see paragraphs 8 above, and 15 below).

Previous years’ apprenticeship reports have stressed the need to give clear guidance about the evidence required as part of a degree apprenticeship submission. Given the continuing high number of cases in which additional documentation is requested, it may be that we need to review this information and provide more explicit guidance on how we expect education providers to demonstrate that their apprenticeship programmes will meet the standards.

It is not necessarily problematic for degree apprenticeship programmes going through the major change process to be more complex on average than standard major changes. However, it would be useful for both the HCPC and all stakeholders if there were ways of reducing the number of cases where we require additional documentation. 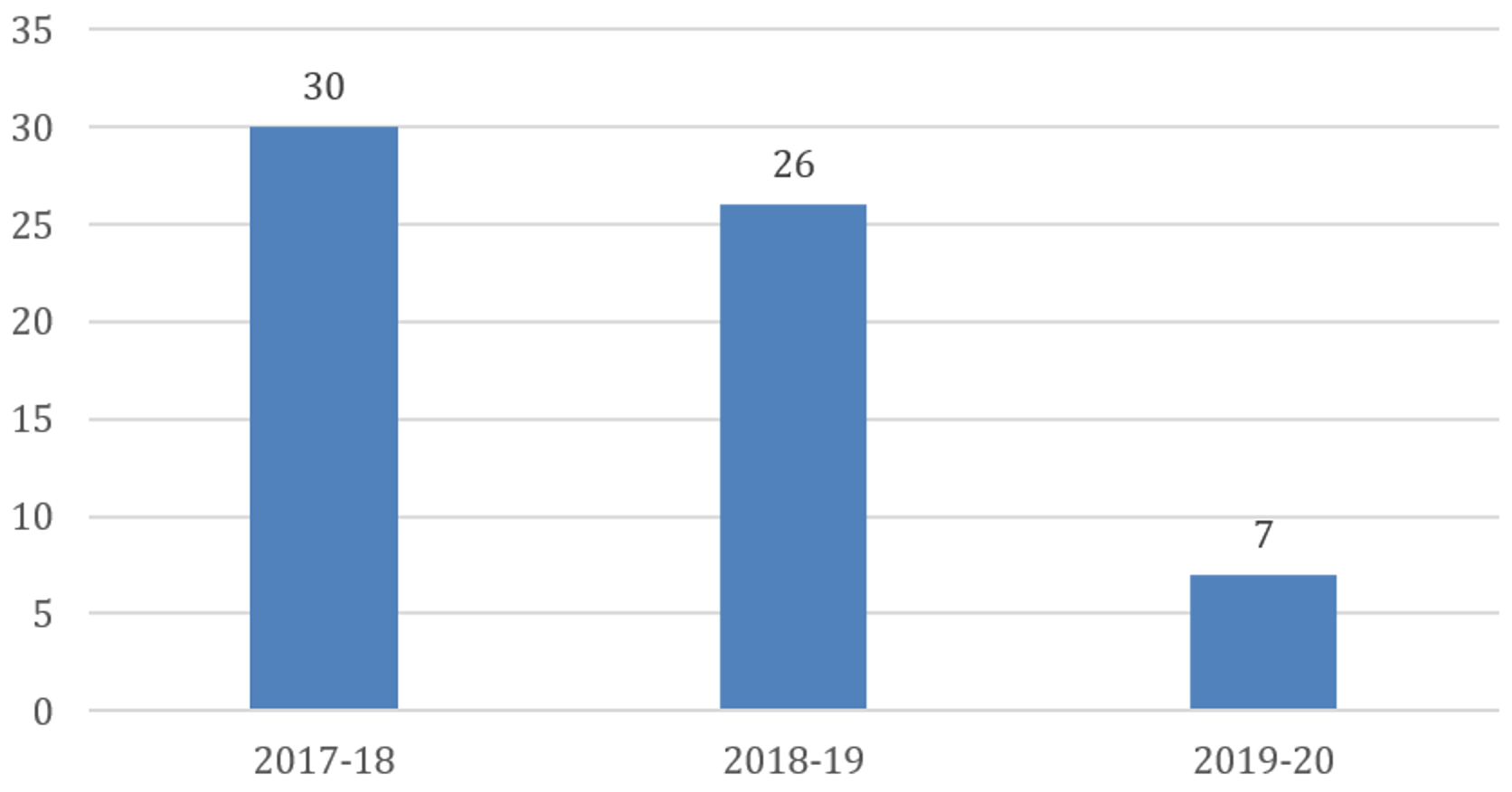 This is due to a reduction in the number of cases being referred out of the major change process, which is a continuing trend across all the three years of apprenticeship reviews, but also likely because the HCPC no longer regulates Social workers in England. This would have meant that social work education providers were no longer coming to us to approve their apprenticeships, which had made up a significant part of the apprenticeship approval caseload during 2017-18 and 2018-19.

The average number of conditions set on these visits was 12 (84 standards across seven visits). However, this figure is significantly affected by two high-condition reports, which had 23 and 20 conditions respectively. The other five cases had an average of only eight conditions each. Visitors eventually recommended approval in all seven cases, and in four the conditions were met at the first attempt.

Only one apprenticeship visit was cancelled in 2019-20. This was at the education provider’s request.

In one case a follow-up visit was scheduled as a way of demonstrating how conditions were met. This was due to visitors’ concerns about learners being enabled to meet the standards of conduct, performance and ethics, and the decision that these would most appropriately be addressed by further discussions with certain groups. The visitors recommended approval subsequent to this revisit.

Looking at degree apprenticeship reviews from 2019-20, the issues that have tended to recur when visitors are making decisions about how apprenticeship programmes meet HCPC standards are the same as those which have appeared in reports over the last three years.

There are some exceptions where issues which have recurred in previous years but have not appeared in 2019-20. An example is the visitors concern around assessment, especially the workings and integration of End Point Assessments. This may reflect a stronger and increased understanding of assessment in general and EPAs in particular among visitors and the HCPC Executive after several years of HCPC work around apprenticeships.

This theme includes questions regarding how the programme is organised and administered at a senior level, how senior leadership from education providers create and sustain relationships with stakeholders, and how the operation of the programme is effectively supported.

Visitors in approval and major change cases across all three years requested further evidence about:

In general, the approach taken by visitors when considering these issues was to consider evidence such as draft working arrangements and tender agreements, with the understanding that the HCPC should be approached if there were substantial changes.

It is likely that visitors tend to seek further evidence in respect to these areas because they are crucial to the effective running of an apprenticeship. Without clearly defined strategic relationships, an understanding of local conditions, and clear definitions of responsibility, apprenticeships will not function as intended.

This includes issues relating to the day-to-day functioning and administration of the programme, including teaching and learning activities, and the quality of the learner experience.

All of the following areas appeared as key themes in approval and major change reports from across the three years of apprenticeship assessment:

As with the high-level leadership issues mentioned above, there are likely reasons for visitors’ continuing focus on these areas. Apprenticeships require particularly strong co-operation between education providers and employer partners on a routine basis to deliver the programme effectively, to address problems in a timely manner, and to support apprentices. The fact that apprentices are also employees in these programmes can affect the dynamics of assessment, and the mechanisms for raising concerns and accessing wellbeing support.

Resourcing of programmes includes not just physical and e-learning resources but also staffing arrangements and access to resources for those who may require it.

Throughout the three years, these were the key issues arising in apprenticeship assessments, both through the major change and approval processes:

Visitors’ focus on these areas is to be expected given that the logistics of apprenticeship programmes – in terms of where apprentices are located and how often they are on site at an education provider – are different to other HCPC approved programmes. HCPC panels are therefore likely to want to explore these issues and ensure that both the HCPC and the various stakeholders have a clear understanding.

This area includes the assessment approach taken by education providers and employers, and the allocation of assessment responsibilities between them.

The key recurring issue in this area, across all three years and in both major change and approval, has been visitors’ desire to be certain that those carrying out assessment in placement and in employer settings were prepared and qualified to do so.

The need for further evidence or more clarity regarding assessment is likely a result of apprenticeships tending to have a model for assessment that differs from other programmes, i.e. with supervising staff in employer settings often having a more expansive role. Education providers are perhaps more used to the conventional practice educator role.

There are professions that have IATA standard approval but where no apprenticeships are yet in place – arts therapists, dietitians, and speech and language therapists.

However, the key theme of apprenticeships is that they are becoming more commonplace and mainstream across all professions and education providers. The Executive has made a policy decision that it is broadly appropriate and proportionate to use the major change process to assess new degree apprenticeships unless there is an indication that a particular case will be more complex. Examples of such indications include:

Looking across the three full years in which we have been assessing apprenticeship programmes, it would appear that we have made significant advances in the way we carry out such assessments.

For example, in adapting the general principles by which we assessed apprenticeships we maintained the integrity of our assessment and our processes while avoiding a disproportionate and undue burden on our education provider partners, and imposing unnecessary costs on the HCPC itself through lower visitor fees and staff time.

Based on the analysis of both 2019-20 and a comparison across all three years, there is no reason to believe that these general principles are not serving our purposes. We have not received negative feedback from education providers about this approach to taking a proportionate response to the risk involved. Anecdotally, some visitors have expressed concerns to the Executive that the major change process is not an appropriate means of assessing degree apprenticeships, but as noted through this report there are means available by which the risks involved can be managed. Education providers have shown that they are able to submit appropriate evidence to demonstrate that they continue to meet the standards.